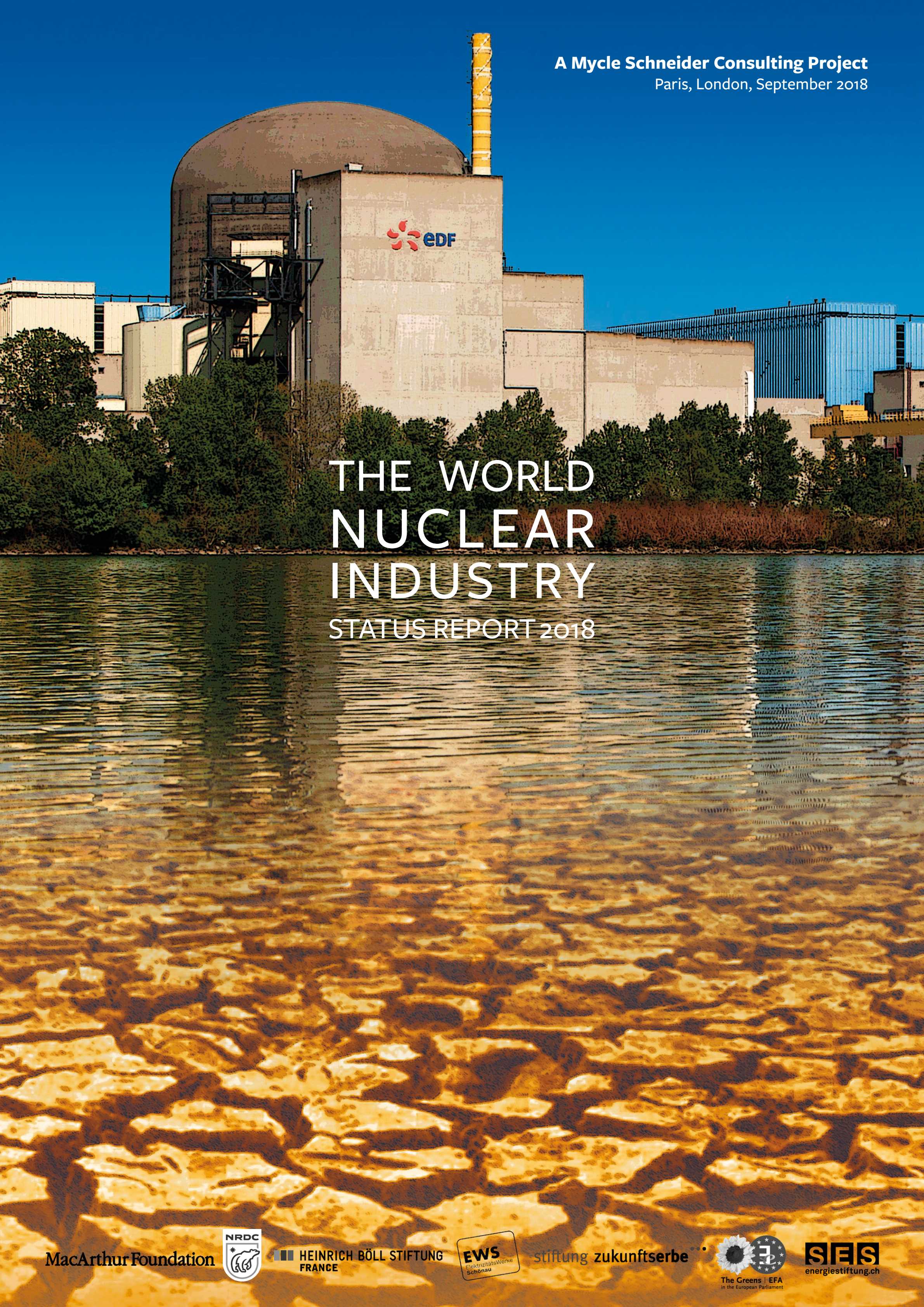 Foreword: A View from China

by HAN Wenke and ZHOU Jie

The development of the world’s nuclear industry currently faces economic, environmental, and safety concerns. A stream of problems must be dealt with, including, among others, the sourcing of funds; the attainability of uranium resources; the processing of nuclear waste; the safety issues within nuclear technology; public opinion and social acceptability; the aging of nuclear facilities and professional staff; the difficulty of ensuring nuclear non-proliferation; and of course competition from renewable energy sources. Past nuclear disasters at Three Mile Island-2 in the United States, Chernobyl in the Soviet Union, and Fukushima in Japan have all undoubtedly contributed to strong currents of anti-nuclear sentiment throughout the world. Caught in between the strong and often vocal conflicts of the pro- and anti-nuclear factions, a confused public may easily lose sight of the truth. The question of how to overcome this binary opposition, and rationalise the discourse concerning the nuclear industry, is no less than a test of human intellect.

The World Nuclear Industry Status Report (WNISR), chiefly edited by Mycle Schneider, provides for us just such an objective and independent report, based on a third-party-perspective which can open the gate to discussions of sustainable development of nuclear energy. This reputable report gives a detailed and thorough summative description of all the significant changes in the world nuclear industry this year, enriched by specific information for individual regions and countries.

Last year we translated the entirety of the WNISR 2017 into Chinese to facilitate wider circulation, which proved to have a positive influence and inspired deep reflection within the Chinese readership. Nuclear power which has consistently throughout the last 20 years been the most important option to replace coal-fired power generation, no longer plays that role today. However, the WNISR, with detailed and updated data, shows that the number of nuclear reactors under construction in the world has been steadily decreasing for the last five years (including this year), and that the annual increase in power generation by wind and solar sources has by far surpassed that of nuclear energy, and does provide for Chinese readers a new framework in which to view the issue and a chance to rethink the future of nuclear energy.

China now ranks first in the world in terms of the scale of its nuclear-power programs under construction and is also enthusiastically expanding its international collaborative programs through the ‘One Belt One Road’ initiative. Domestic construction of nuclear power facilities is slowing down, affected by changes of power supply and demand, by public pressure concerning issues of safety, and by the emphasis placed by the government on the rehabilitation of ecosystems. However, both the Chinese government and nuclear industries remain optimistic and confident about the prospects of nuclear energy. At the same time, we do observe, and experience first-hand, the profound changes in the structure of global energy supply and demand, especially the increase and diversification of energy supplying. These changes can be traced back to internal developments in the energy industry, to the influence of the changing international political and economic environment, and to the global response to climate change. After the Fukushima nuclear accident, the nuclear energy industry has certainly been the fastest-changing in the field, compared to other types of energy resources. To researchers and practitioners in China’s energy industries, as well as to the quotidian public, there is value to be gained from an awareness of the world’s newest trends in nuclear power development, and an appreciation of the development plans and programs (both those completed and those long-anticipated) in other countries in real detail. Apart from experiencing and bearing witness to the growth, progress, and worries associated with our own nuclear industry, this can facilitate a critical, rational approach to thinking of the nuclear industry at large, and inspire ideas as to how China's nuclear power can expand further.

In China, due to the slowing growth in demand for electricity, in combination with the rapid development of wind and solar power as well as the ‘excessive’ installed capacity of coal power, the need for further development of nuclear power has already diminished considerably. The social context of nuclear power-plant construction is also facing big changes; voices opposing nuclear environmental and safety issues have become inevitable ‘warnings’ to which policy-makers must respond. The result is the cancellation of some nuclear programs in the preparation phase, and delay of those under construction. Of course, a nuclear program can be delayed or end up over-budget for a variety of reasons. But the ever higher demands for nuclear safety and the growing production costs of newer nuclear technology are impediments that policy- and decision-makers cannot overlook.

On the other hand, in recent years the development of China’s renewable energies, especially on-grid wind and solar, have been rapid and significant. Their rates of annual increase are continually among the highest in the world, and the cumulative installation capacity is still growing. The annual amount of electricity generated by wind and solar energies is now level with and even higher than that from nuclear energy. However, holistically, the amount of electricity generated by China’s non- hydropower renewable energy still makes up only a very small percentage of the entire amount, and the wind and solar power generation will not be able to form a stronger competitive advantage at the present stage. The cost of manufacturing and installing solar and wind power in China is indeed quickly decreasing; in some provinces, the price of planned solar power can be equal to the price of nuclear power, with no need for state subsidies. The WNISR's discussion about nuclear power vs renewable energy, and Dave Freeman's view in his Foreword to WNISR2017 that "renewable energy is a lower cost and cleaner, safer alternative to fossil fuels than nuclear power," opens a window of thought for Chinese readers.

This year, WNISR 2018 is set to greet its readers once again, with a report that is as well-researched and timely as it has ever been. For all those who care about the development of the nuclear industry, to read this new report as soon as possible is something well worth looking forward to, and we certainly trust that in China, this topic will continue to garner more attention in the future.

Zhou Jie is Vice-Director-General and Secretary-General of the International Forum for Clean Energy (IFCE, MACAO) 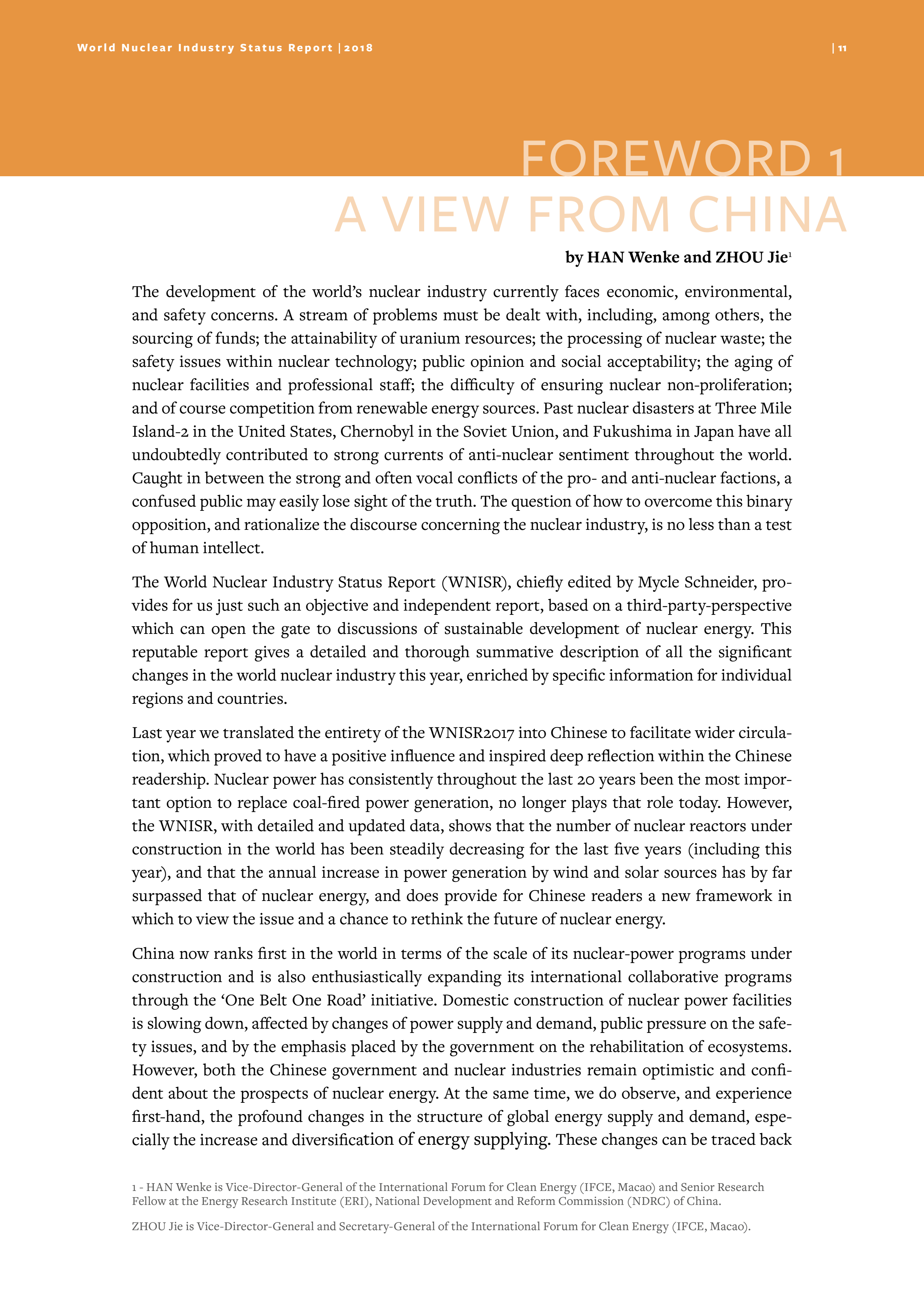 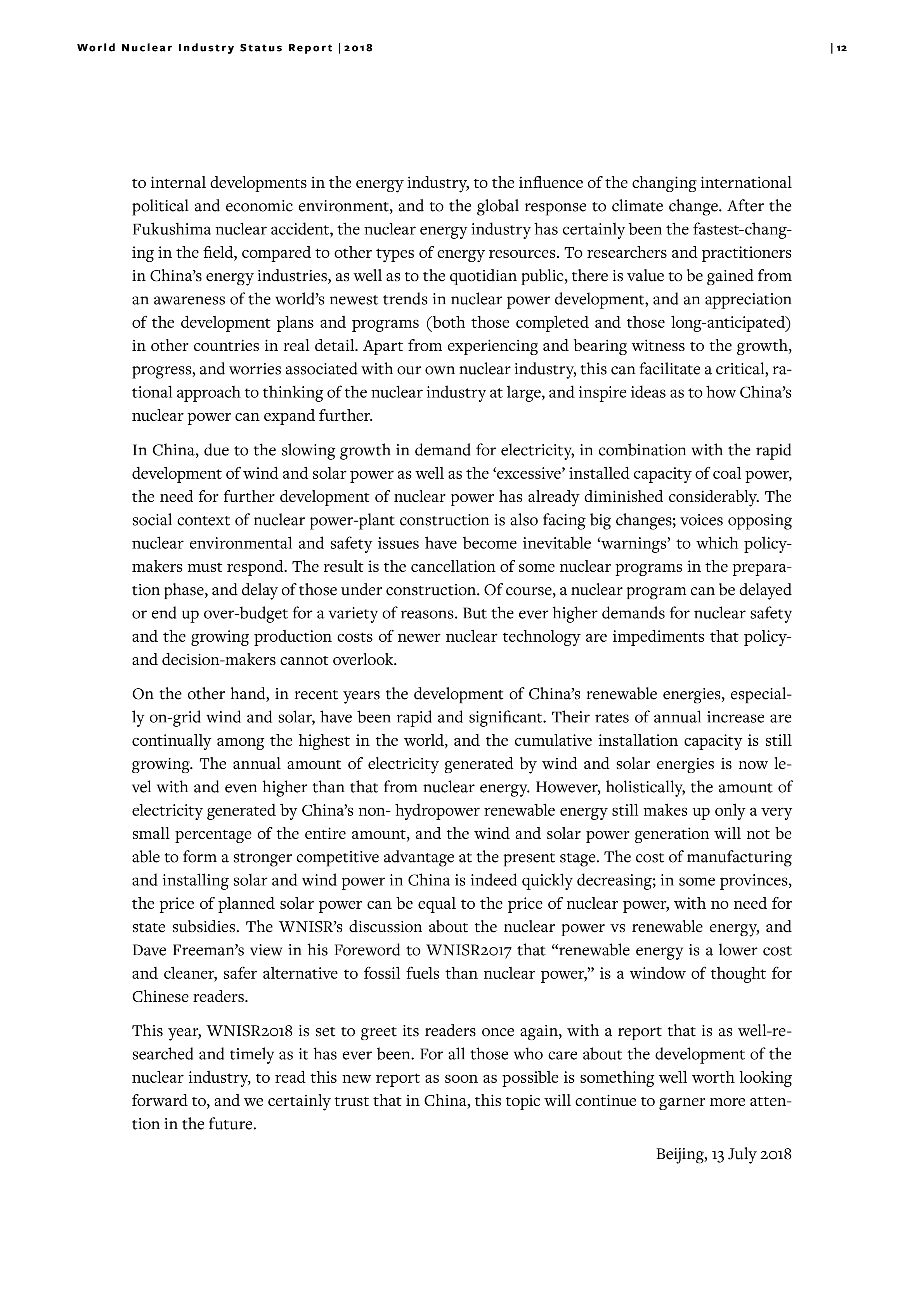